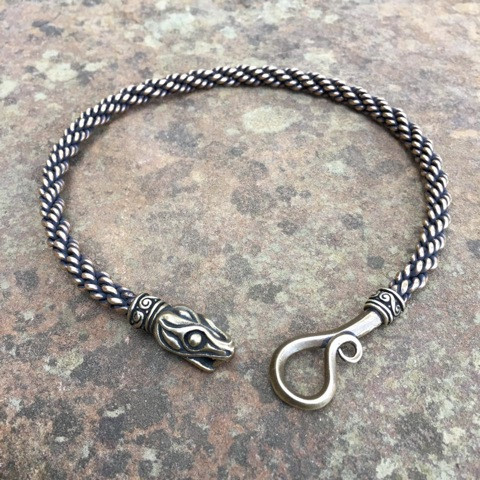 Description
Ouroboros is name given to the ancient serpent biting its own tail as it devours itself.

This torc was designed to be a companion piece to our snake arm ring. While we have not found historical evidence of torcs also being worn in the style of a coiled snake, it seems likely that they existed.

Our Ouroboros Snake Torc is constructed with a medium braid of wire, and is approximately 5/16 inch (8 mm) thick. It is available in bronze


Which Torc Is Right For You?

We also offer an Snake Torc in the medium braid.

The Ouroboros is an ancient symbol depicting a serpent or dragon eating its own tail. The name originates from within Greek language; (oura) meaning “tail” and (boros) meaning “eating”, thus “he who eats the tail”. It represents eternity and the cycle of life, death and rebirth, leading to immortality, and is a symbol used widely in many different cultures throughout the world during the course of history.

The serpent eating its own tail first appears in Ancient Egypt, in the Enigmatic Book of the Netherworld, an ancient Egyptian funerary text found in the tomb of Tutankhamun. In Egyptian hieroglyphics, it represented the concept of a year, as noted by the 4th-century AD Roman author Servius: “according to the Egyptians, before the invention of the alphabet the year was symbolized by a picture, a serpent biting its own tail, because it recurs on itself”.

The emblem is then borrowed by Greece. The Ouroboros grew out of the belief that serpents eat themselves and are reborn from themselves in an endless cycle of destruction and creation.

In Viking mythology Jormungandr, also known as the Midgard serpent, was the child of Loki and Angrboda, and grew so big that it could eventually encircle earth and reach and devour its own tail. Also, in one of the tales regarding the Norse hero Ragnar Lothbrok, the Geatish king Herraud gives a small lindworm (constrictor snake) as a gift to his daughter Pora Town-Hart. But this small lindworm grows into a large serpent which encircles the girl’s bower and bites itself in the tail. Ragnar Lothbrok kills the serpent and marries Pora. Later, Ragnar has a son with another woman, Kraka (Aslaug), and their child has a white snake image surrounding the iris of one of his eyes. Just as the serpent slain by Ragnar, the snake in his eye bites its own tail. According to the story, this is why Ragnar named his son “Sigurd the Snake in the Eye”.