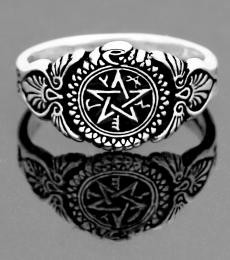 3 Magical Ring designs were re-discovered in an Ancient Magical Grimoire. Within its pages are Magical Symbols ascribed to Ancient Egyptian Magicians and Sages.

In the shadow of "The Grand Colossus" (The Great Pyramid), the expedition was attacked by a horde of "Arabs of the Desert." In a fierce battle, all were slain save the brave officer, who was mortally wounded; "suddenly a stone rolled back in the Pyramid and a venerable man issued forth."

This Ancient Sage used Magic to revive the officer and took him into the Great Pyramid where; "there were vast halls and endless galleries, subterranean chambers piled with treasures, apparitions of blazing lamps, ministering Spirits innumerable." Gaining the confidence of the Ancient Sage, the officer was made his apprentice and taught "in the powers and wonders of twenty-two Talismanic figures and the Rings corresponding…."

The Healer's Ring #1 is one those Three rings...

The original design of our Healer's Ring consists of several powerful ancient symbols. The outer circle is the "Ouroboros," a snake swallowing its tail. The Ouroboros originated in Egypt as a symbol of the Sun, and represented the daily travels of the Sun. In Gnosticism, it was related to the solar God, Abraxas, and signified ‘Eternity’ and the ‘Soul of the World.’ It represents the ‘Spirit of Mercury’ and symbolizes Continuous Renewal: the cycle of Life and Death and Harmony of Opposites. A snake is often a Symbol of Resurrection, as it appears to be continually reborn as it sheds its skin.

The inner circle has the Pentacle, which has been used as a Powerful Magical symbol for thousands of years. The five points of the Pentacle can represent the four elements of, Fire, Water, Earth, and Air with the fifth point representing the ‘Fifth Element;’ Spirit. Many believe the Pentacle to be a Symbol of Protection and Safety. The Greek philosopher, Pythagoras, thought the symbol represented the Harmony of Mind and Body and considered it a symbol of Good Health.

The letters surrounding the Pentacle are Greek letters, which read from right to left, and spell out "Salus" a Roman Goddess that corresponds to the Greek Goddess of Healing, "Hygeia."

The Magic of this ring enables the bearer to bring the Healing Powers of the symbols and the powers of the Gods/ Goddesses to bear on any health problems. Good for patients as well as Doctors, Nurses and all other Healers.