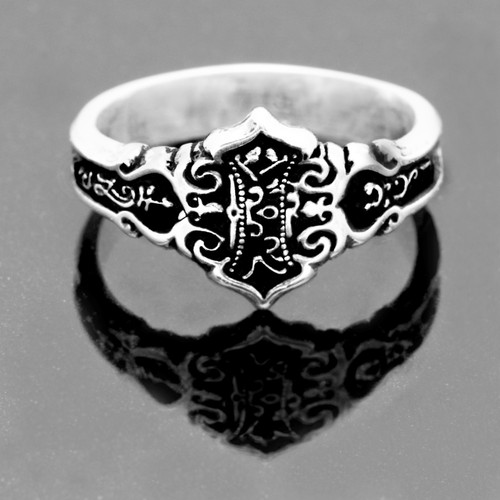 3 Magical Ring designs were re-discovered in an Ancient Magical Grimoire. Within its pages are Magical Symbols ascribed to Ancient Egyptian Magicians and Sages.

Its story dates back to the French General Napoleon's military expedition to Egypt…An officer in the army was sent on an expedition to the Pyramids of Egypt… In the shadow of "The Grand Colossus" (The Great Pyramid), the expedition was attacked by a horde of "Arabs of the Desert." In a fierce battle, all were slain save the brave officer, who was mortally wounded; "suddenly a stone rolled back in the Pyramid and a venerable man issued forth."

This Ancient Sage used Magic to revive the officer and took him into the Great Pyramid where; "there were vast halls and endless galleries, subterranean chambers piled with treasures, apparitions of blazing lamps, ministering Spirits innumerable." Gaining the confidence of the Ancient Sage, the officer was made his apprentice and taught "in the powers and wonders of twenty-two Talismanic figures and the Rings corresponding…."

Here is the first of those Three rings...

The "Animals Ring" and the associated "Communication with Animals Talisman" are said to enable the wearer to understand the Language of Animals. It also gains the bearer immunity from any attack of a ferocious beast. It helps enhance Psychic Bonds with Animals and Promotes Understanding of their Body Language. The Powers of this Magical Ring are strongest when the ring is used in conjunction with the associated Talisman.

Our Communication with Animals ring created from a unique ring drawing from Qrys Bennett inspired from The Black Pullet Manuscript, actualized by Pepi, Cast in Sterling Silver by American Crafts persons in the USA. Dimension 7/16th " at the crown of the ring: Available in sizes 4 to 12 by half sizes.
Call or e-mail for available sizes or request your size at checkout